Today's t.t. reminds me of Summer holidays in the 70's when my parents thought it might be fun to cram seven of us in a caravan. They were right...kind-of. We did have fun, but what I remember most is burning my bum and legs on the hot vinyl which covered the seats of our station wagon. Those sticky legged trips between towns and caravan parks seemed to last an eternity - you can imagine the fighting that went on in the back seat. We were hot (no air cond, of course!), bored, and probably busting to go to the loo (and told to hold on)

Nothing's changed. Our girls carry on in exactly the same way, despite the distraction of technology. All we had were colouring books and those 'magic' pads you drew on (you know the ones where you lift the plastic top sheet and your scribbles are erased) Those things were hi tech back then!

One of the places we parked the caravan, was Pemberton, which brings me to today's tea towel 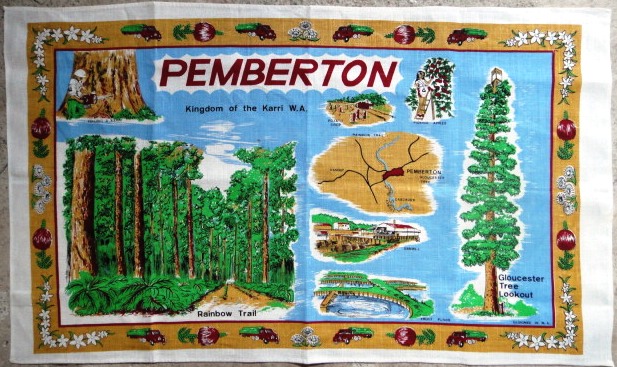 Pemberton is a small country town 335 clicks (kms) south of Perth. As it 'says' on the tea towel it's best known for its magnificent Karri forest.

What I remember about Pemberton is climbing The Gloucester Tree. It's on the t.t. too. I'm pretty sure it didn't have a warning sign like this in 1975 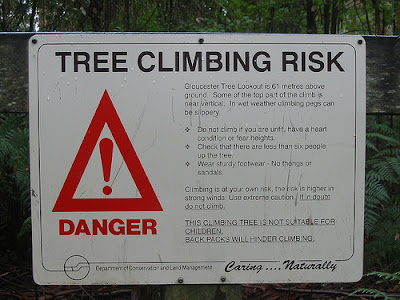 "This climbing tree is not suitable for children"

There is no way my Mum would've let me climb near it, if it did. The sign also says no thongs or sandals which is (and you know this already don't you?) exactly what I wore. My blue thongs or (my brown school - yuk!) sandals.

The Gloucester Tree was chosen as a fire look out in 1947 and named after the then Govenor-General of Australia, HRH The Duke of Gloucester. 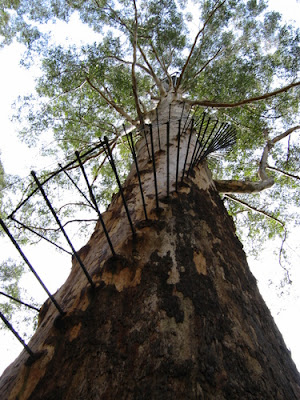 It's a 61 metre climb to the top (or 153 of those pegs you can see sticking out). According to Wikipedia T.G.T. is the second tallest fire lookout tree in the world. Wiki's little blurb also says that only 20% of visitors climb all the way to the top of the tree - most people only make it part way before turning back. Chickens!

Anyway, that's today's t.t./little trip down memory lane done. Here's some more info on Pemberton if you're interested. I do like this funny little drawing of a car 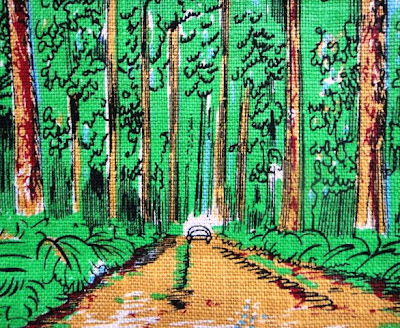