Me, myself and I at the Cinema

Yesterday afternoon I did something I haven't done for a very, very (since I was a teenager!) long time. I went to the cinema on my own (it's all spine-tingling, mind blowing stuff around here!) Now I'm guessing this isn't a big deal for you, but for me, it really was. So much so I'm documenting it here. I saw this 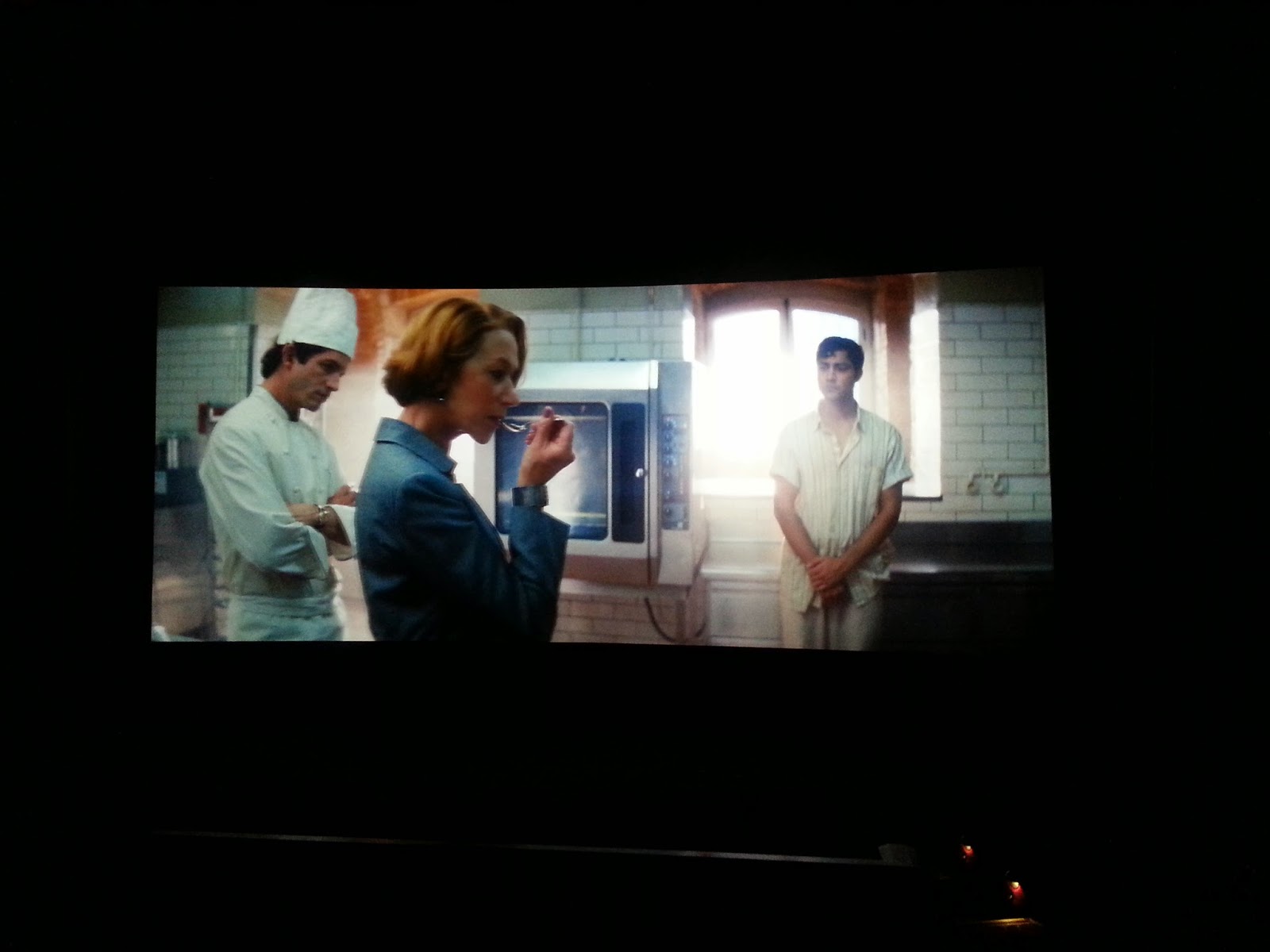 I took a photo for posterity's sake - my own, not my offspring's - they just think I'm sad (and I know my taking of this photo probably proves them right)

While I liked the movie
(I only felt like a loner for the first five minutes)
the best bit was actually going solo. I felt (and I feel silly saying this) a little bit brave and quite grown-up as I sat in an empty cinema, munching on my choc-bomb. Solo.

When you think about it going to the cinema sans friend is quite sensible:
you don't have to share your popcorn or put up with the person next to you sighing and shifting in their seat every five seconds
(or snoring like Anthony did during one of the Harry Potter films. Can't remember which one - I wasn't a huge fan either)
because they hate the movie you've chosen.
It's not like you're going to chat to the person next you either.
In a strange way it's even quite romantic.

It's nice to escape on your own every now and then, and watching a movie for an hour or so is a perfect way to do this. After my little epiphany yesterday I'm going to do it more often. Next week I'm taking myself to the new Woody Allen flick (Magic in the Moonlight), the reviews aren't kind but I'll make up my own mind.

Speaking of Woody and going to the cinema alone, has reminded me of The Purple Rose of Cairo - one of my favourite Woody Allen films, in which one of the main character's, Cecelia (Mia Farrow), goes to the cinema every day (on her own) to distract herself from her worries and miserable life. Eventually she falls in love with the hero of the movie, Tom Baxter, who steps out of the screen and falls in love with her.
(there's more to it than this - forgive my brief synopsis)

Do you go to the cinema on your own?

Do you worry (unnecessarily) that people might think you're a loser, or is was that just me?!


I'd really love to read your comments on this. Thanks as always for reading x

I know vintage tea towel cushions have been around the traps for yonks, but even though I've bought a couple
(and I've been the happy/lucky recipient of some really lovely ones too)
until recently (I'm talking this week) I have never sewn my own.

There were two main reasons for this:
(and lord knows a deficit of vintage tea towels to make 'em with wasn't one of them!)
1. I couldn't bring myself to go near them with a pair of scissors,
and
2. Fear of zippers (i.e. inserting them)

Anyway, as mentioned above that's all
(or almost all - I still feel like a vandal, and sewing zippers still = mucho unpicking)
in the past, because as of today I have made three.

Here are two of them
(the third - my first attempt, is on its way to a bona-fide vintage tea towel cushion connoisseur in South Australia. Scary!)
they are for my Mum whose Grandfather was Scottish (and her Father was the President of "The Thistle Club" here in Western Australia in the 50's). Just explaining the Scottish thing... 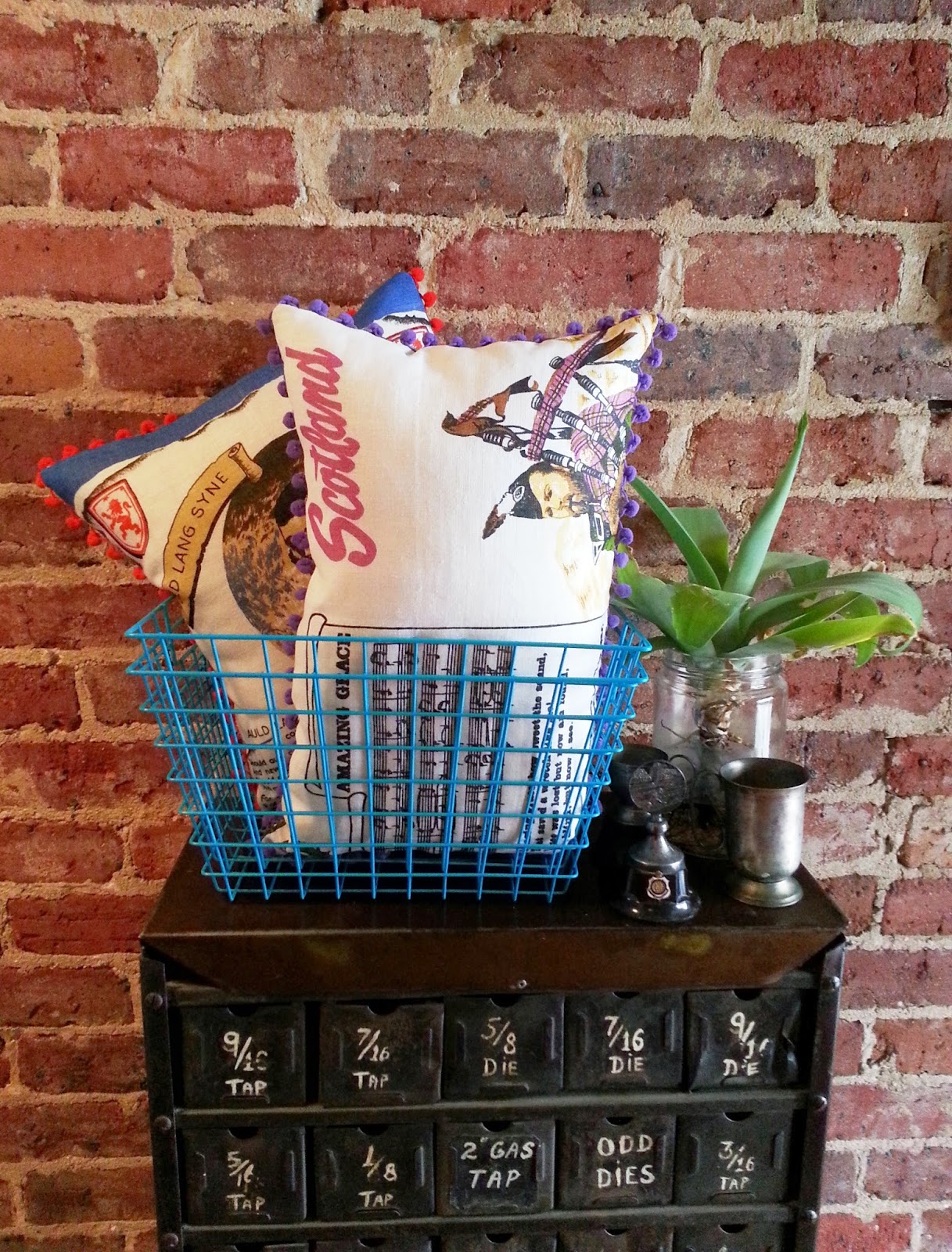 ta-da!
Pom-pom trim (Grrrr! Hideous to attach!) and all!

Robbie Burns on one. 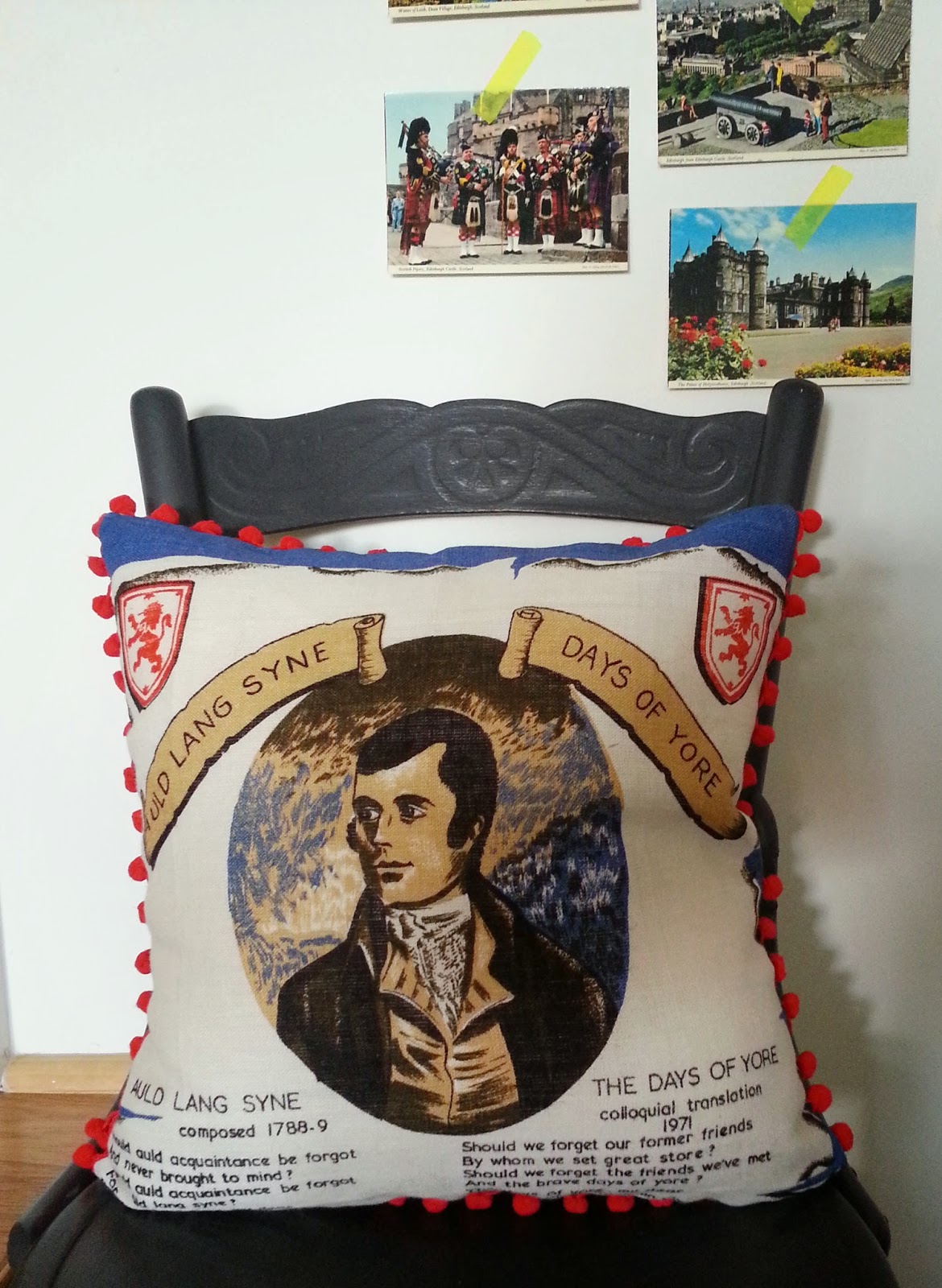 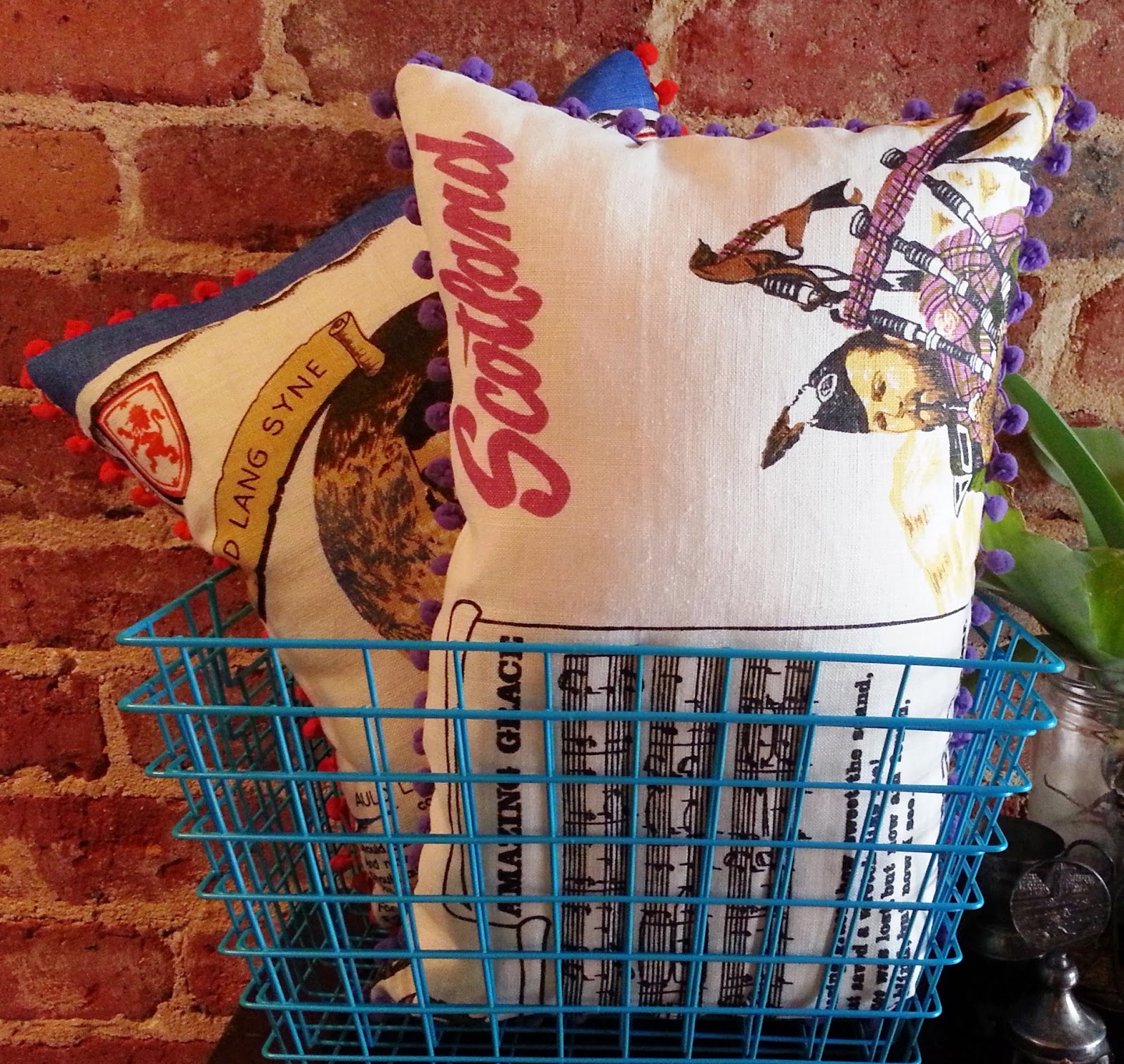 Do you think she'll like them?
I hope so.
We're all (Mum, my sisters and me) going out for lunch tomorrow so I'll let you know next time I'm here.
Annabel says she doesn't like them...but she admires me for giving it a go! Ha! There's nothing like a (brutally) honest teenager! 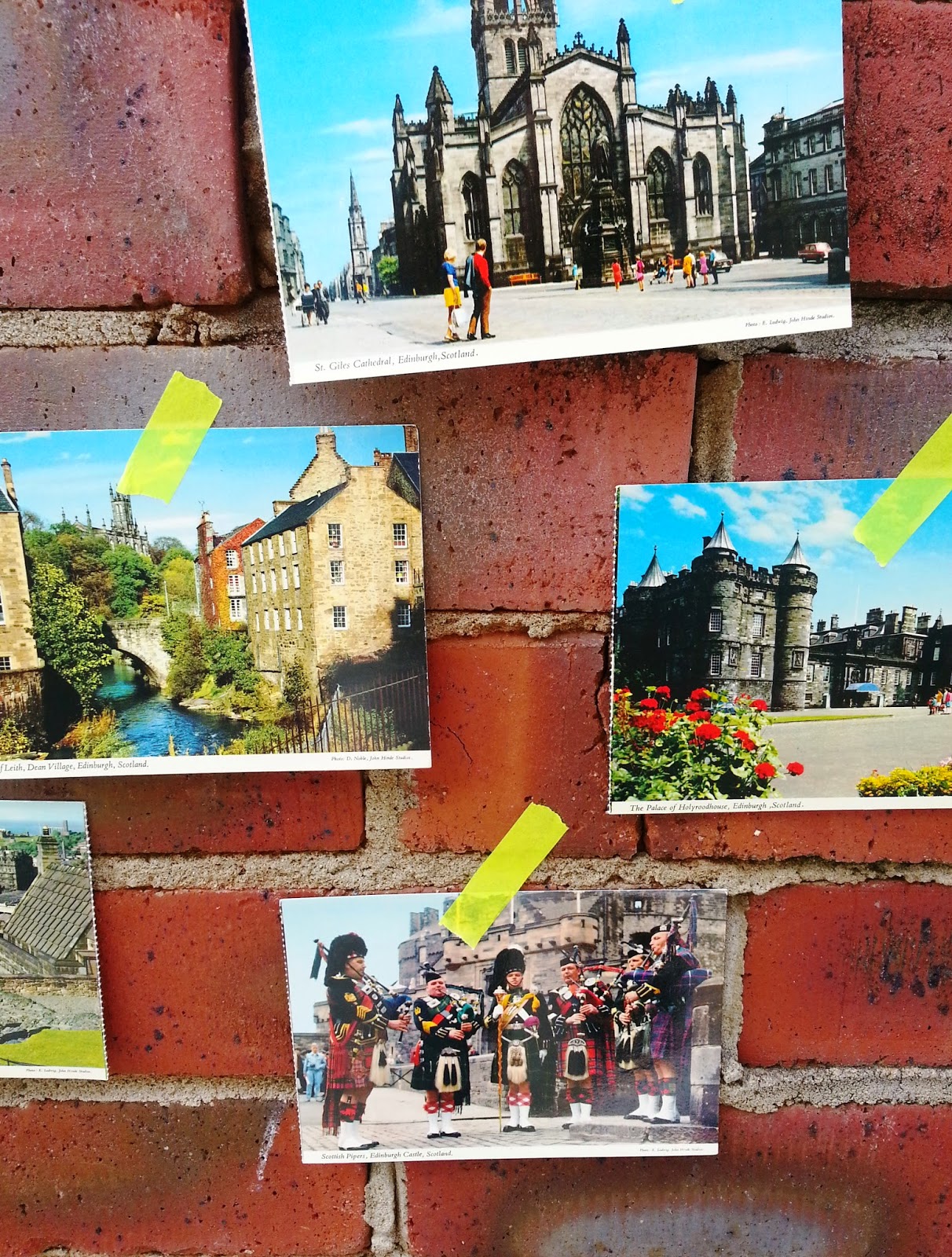 p.p.s. I found this tutorial on how to sew a concealed zipper very useful.

Oh and here is a link to my friend Vicki's ace post on tea towel cushions and vintage Australiana tea towels in general. It's interesting and funny, and I know you'll enjoy reading it.

Sometimes it's good when things don't turn out the way you thought you wanted them too. 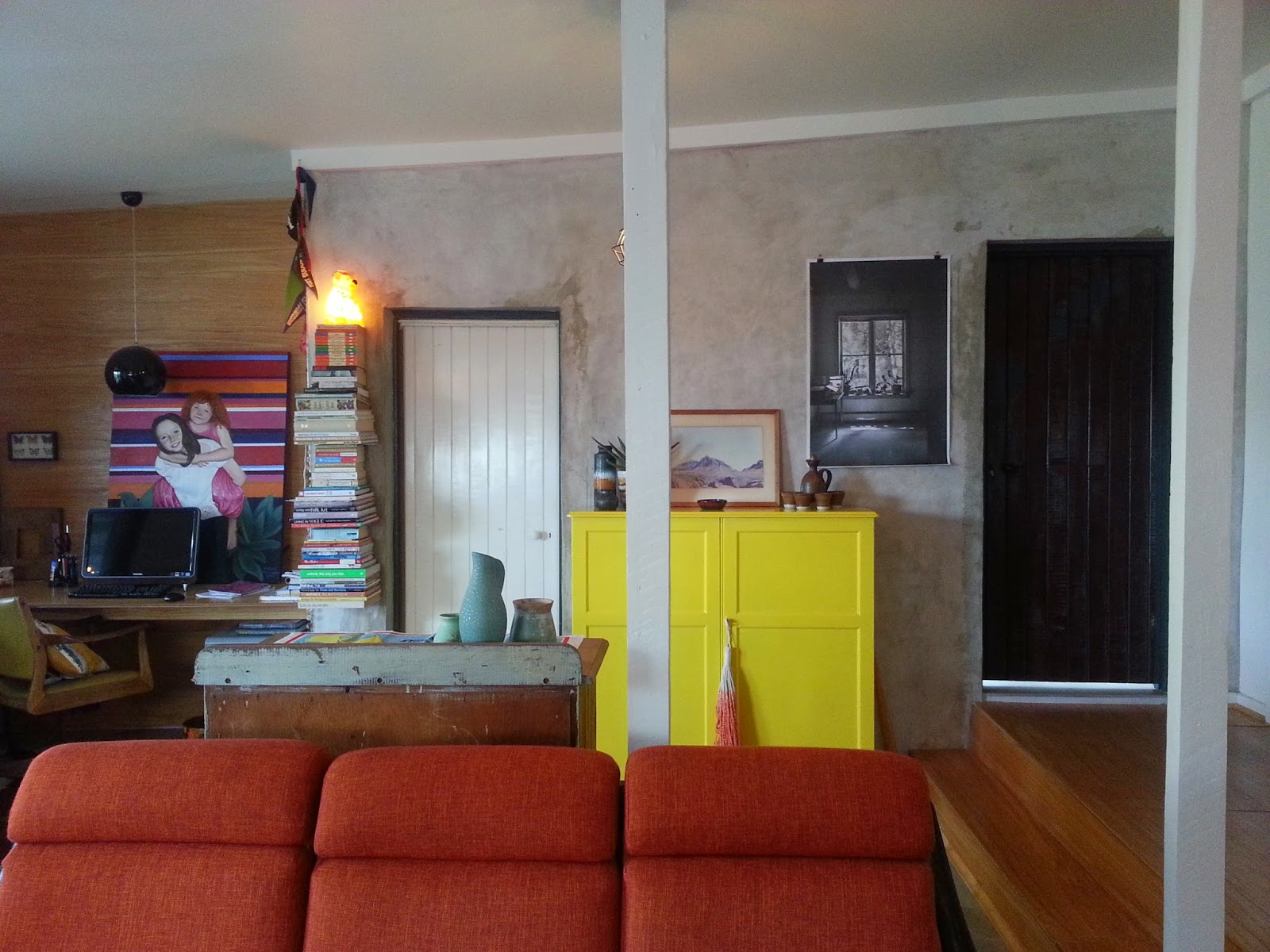 This is a photo of our laundry and bathroom doors. Anthony has just(-ish) hung them.

Months and months ago (six months ago? longer? I can't remember...) when we were renovating our bathroom and laundry we ordered two new doors. Opaque glass framed with timber. I was going to paint the timber bits Murobond Dark Night - which is just a fancy name for black really ;)

You would not believe the drama that ensued...although knowing our track record, perhaps you would?

The doors we ordered - nothing special (at all!) were going to cost us over two thousand bucks because they had to be made to measure to fit the crooked little doorways in our wonky old house.

note: if our doorways were a standard size, we could've picked up the same doors from the local Hardware for a few hundred. That's for both of them! Crazy!

Anyway to cut a long story short, as you can see we didn't end up with the doors I ordered, but with these fifty five dollar cheapies (ex dunny doors from a salvage yard) instead. And now they're up I really, really like them. I didn't want to

because you know, sometimes when you have your heart set on something it's hard to let it go (even when you know you're being a twit about it)

Actually I'm glad that the company we dealt with didn't know one end of a tape measure from the other(!), their incompetence saved us a LOT of money and the quality of our old Jarrah doors is vastly superior to their doors too.
Which brings me to the moral of this story :)

I was going to paint them black, but I think I'm going to leave them as we found them...What do you think? Do you like them? Would you go all matchey-matchey and paint them, or leave them as is? Maybe you would've persisted with the door company? If your experience with them was the same as ours, I don't think so!

The door on the right (our bathroom door) needed a lot of sanding. I loved the traces of original blue paint left behind so I've given it a few coats of Gilly Stephenson's Carnauba Polish (smells delicious and it's made in Western Australia) 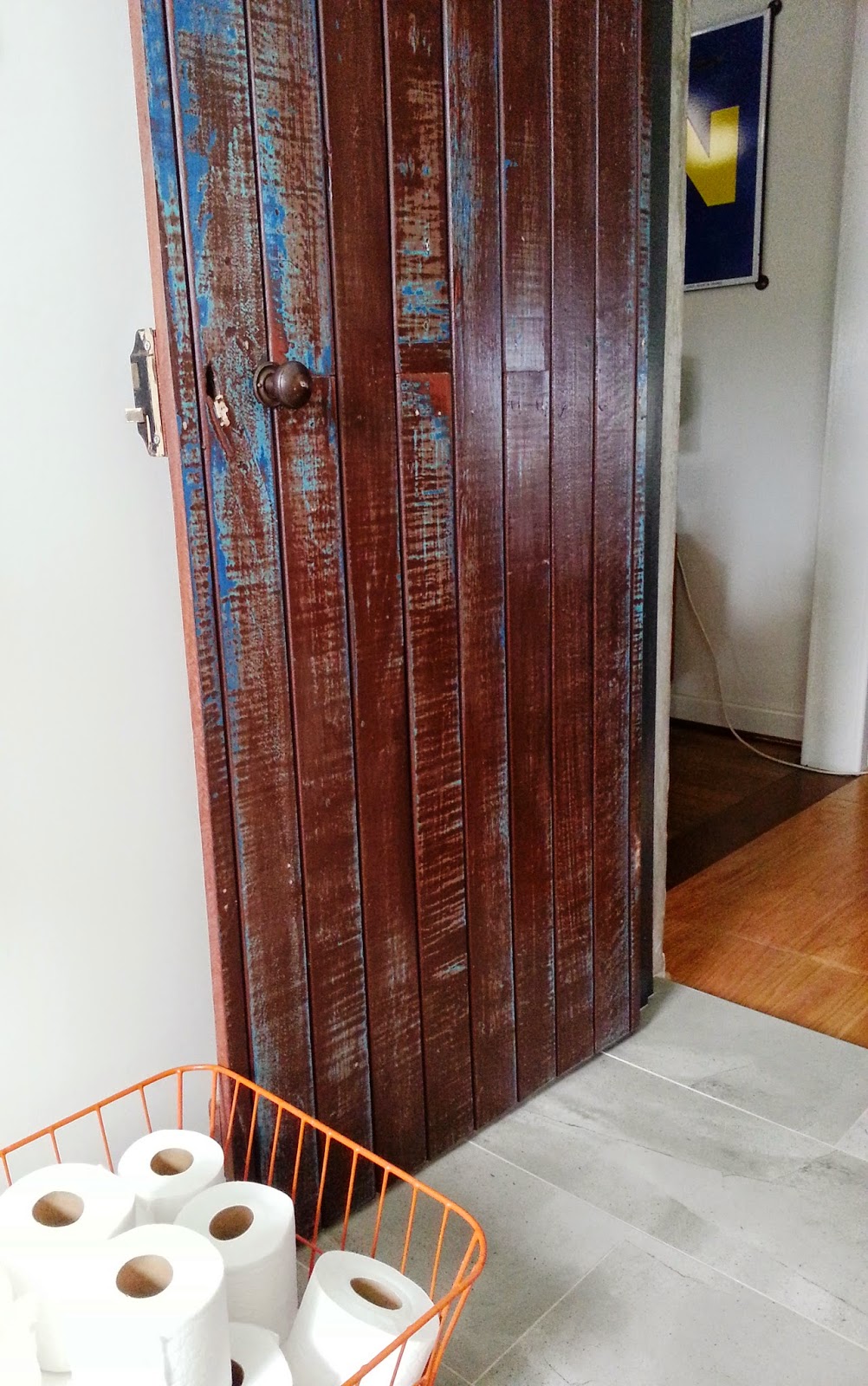 The door on the left (laundry) was in good nick so I just gave it a good scrub. 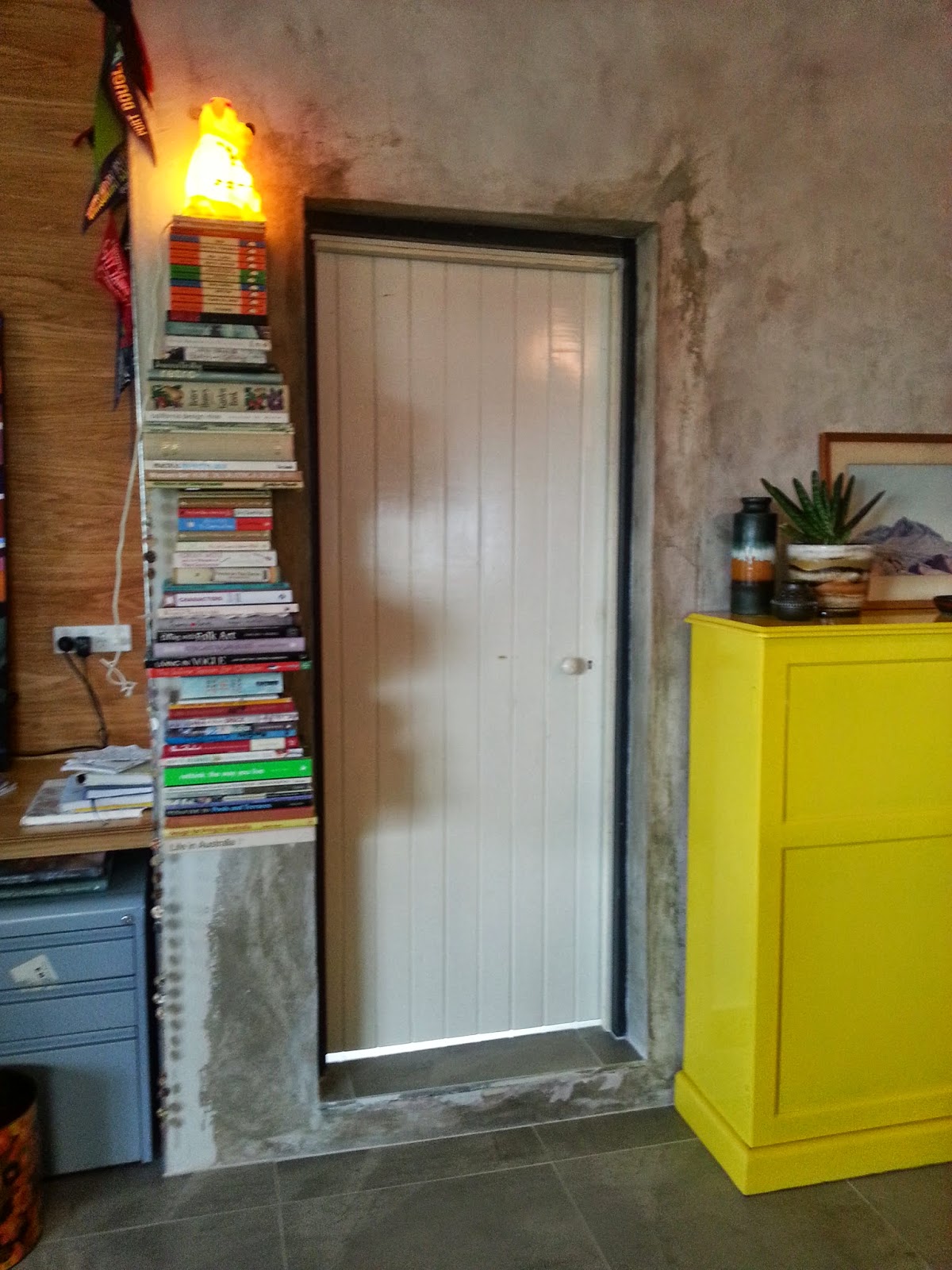 Who knows what lovely colours are hiding underneath?!

Thanks for reading. I know this post is as boring as bat sh**!


p.s. you see that concrete wall? There's a story behind that too. Of course there is!

Of Nothing In Particular

or seven things about me that no one knows...

and no one probably wants to know about them either;) but this is the drill if you're nominated for The Versatile Blogger Award like I was (yonks ago!) by Taz of Butter and Buntings and Hundreds and Thousands Magazine fame)

Thank-you for nominating me Taz and apologies for my tardy response.

I'm just going to bang these things out as they come to me which is tricky for me because I like to consider the stuff I write here - which brings me to 'thing' numero uno:

1. I am a chronic over-thinker and worrier.
Not a good combo. 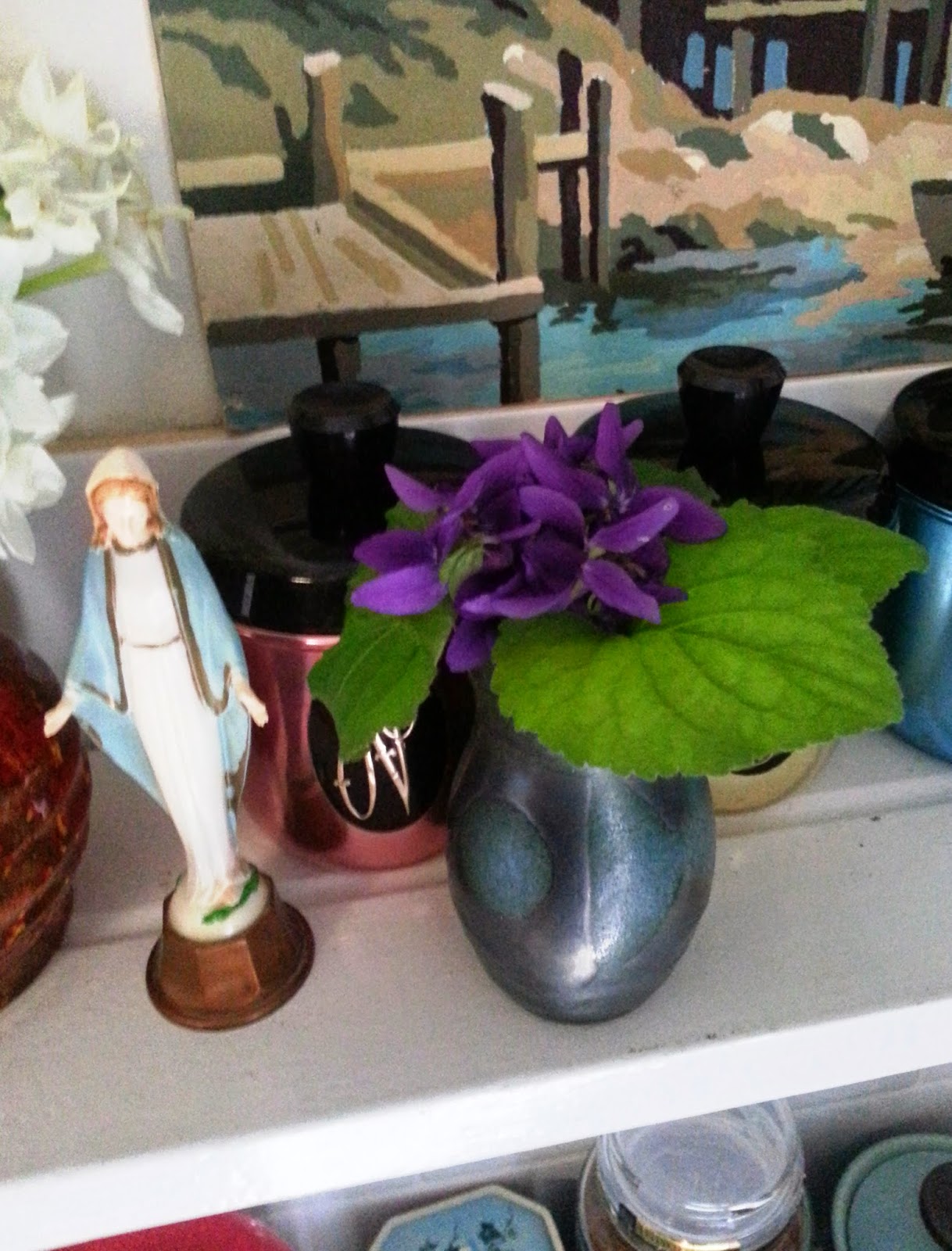 3. It is also the only thing I like about my face - I am childishly proud and vain about my snozz (or button - that's what I call it. I know!)
Anth and the girls often taunt me (and my perfect nose) but when they do I just hold it up higher and stick it out* as far as I can in a proud and noble manner.

*not an easy feat because it is tres petit ;) 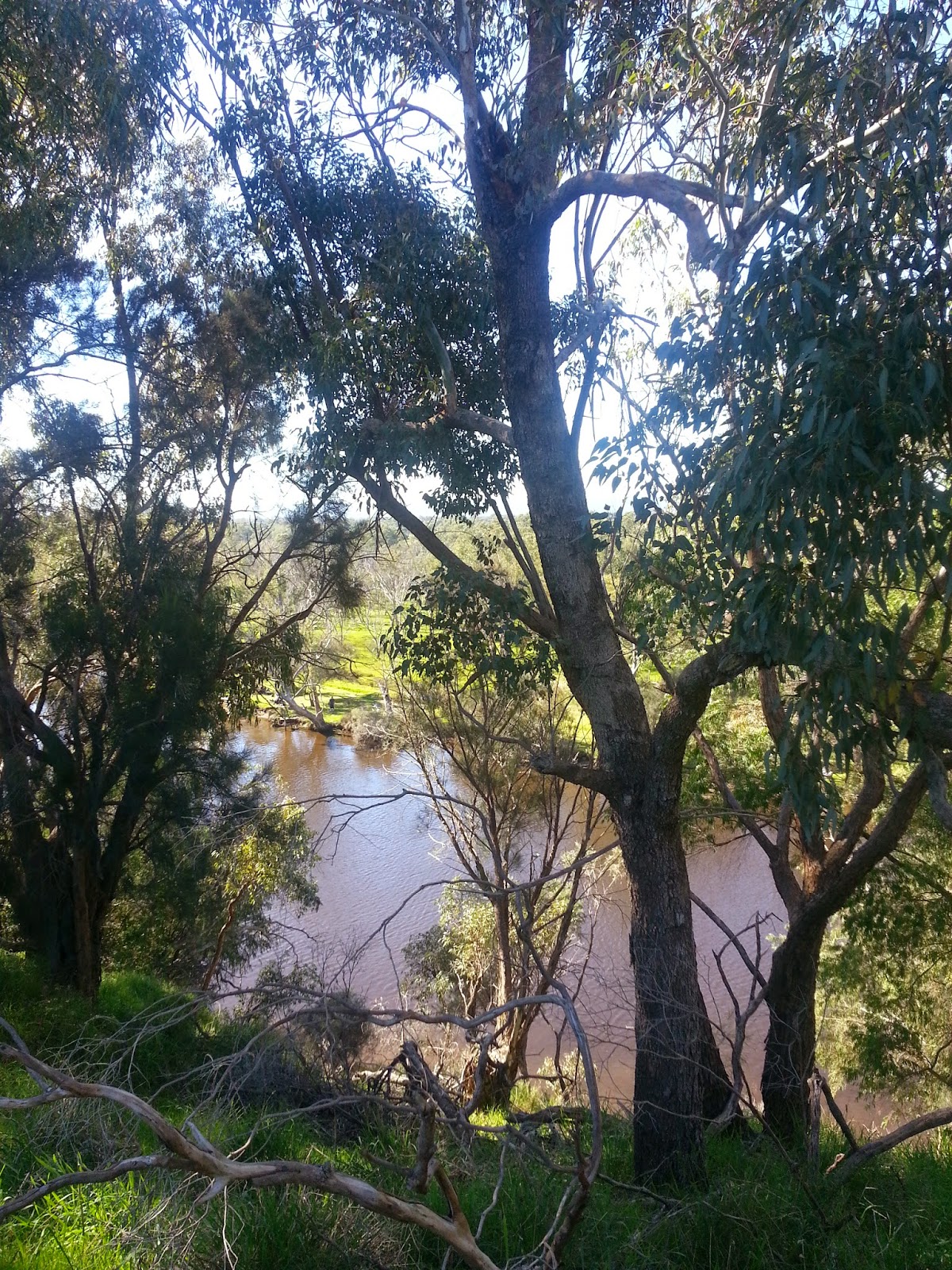 4. Another photo, another segue!
I get really cross at people who don't pick up their dog's...business (I'm yet to confront anyone - but I've wanted to!) In our town it is an "Offence to Excrete" (Dog Act 1976, Dogs Local Law) but this has not been enforced properly until recently. You'd think the threat of a $200 fine would be enough to encourage dog owners to pick up their dogs poop, but for many of them it isn't. There are free Poo*Ch Pouches ("the no-touch solution to problems that dog you") everywhere too, but some people are just too lazy/ignorant/selfish/squeamish(?)to use them - and I just don't get it! I mean I don't really want to stand there, hand encased in plastic, watching the Jedster do a "jobby" (this is what my Nan called them), let alone get close enough to pick it up (remember my nose!), but I do it - because you've just got to - don't you?!

5. We have just chipped off the plaster in our passage way to reveal the beautiful, hand-made, 100+ year old bricks hiding underneath. A hideous job (dust and rubble from you-know-what to you-know-where!) but so worth the blood, sweat, dust and...swear words. Well we think so anyway...you? 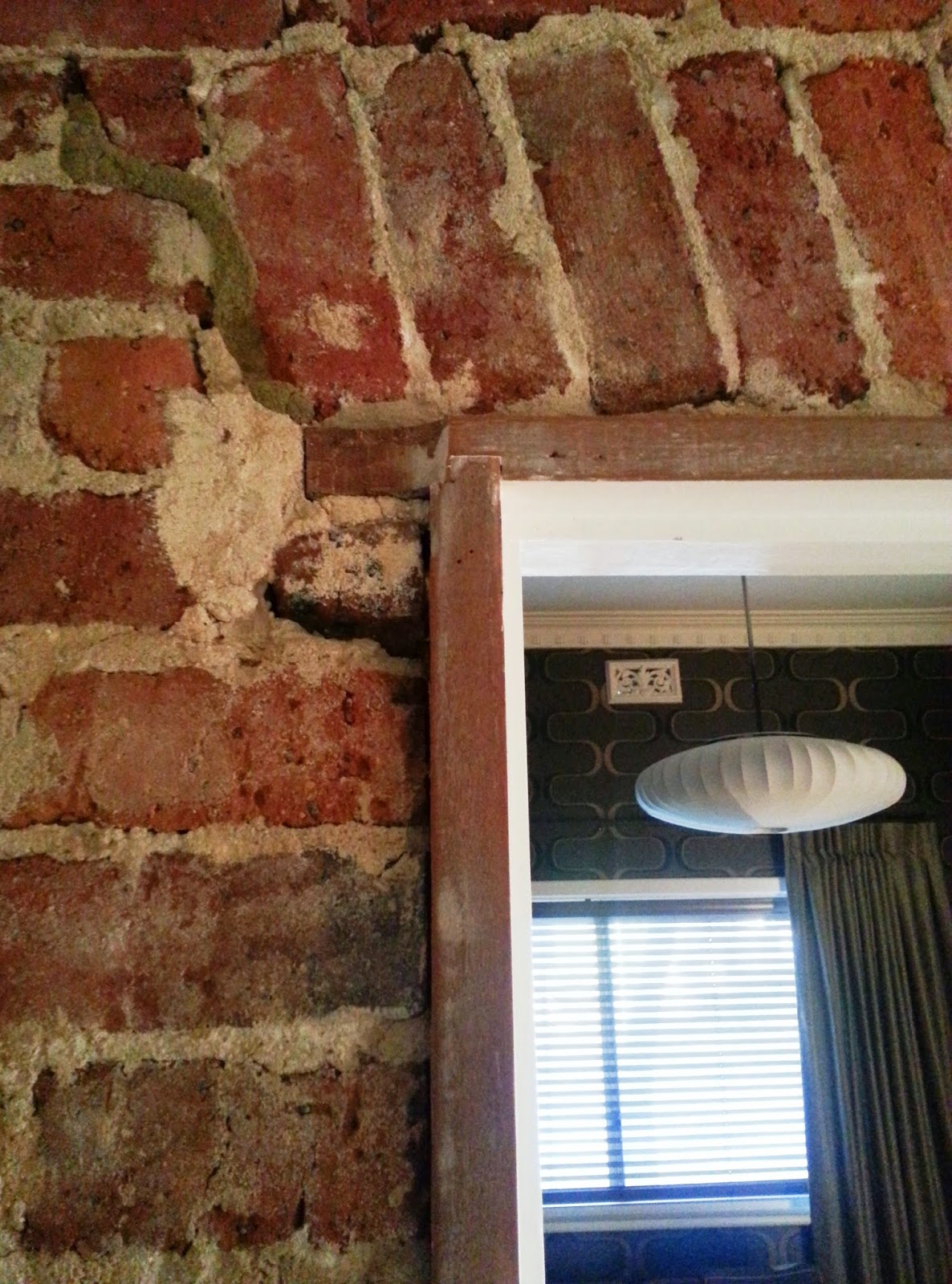 It's taken a few years, but I've finally started to like the creaky old bones of our funny shop house. 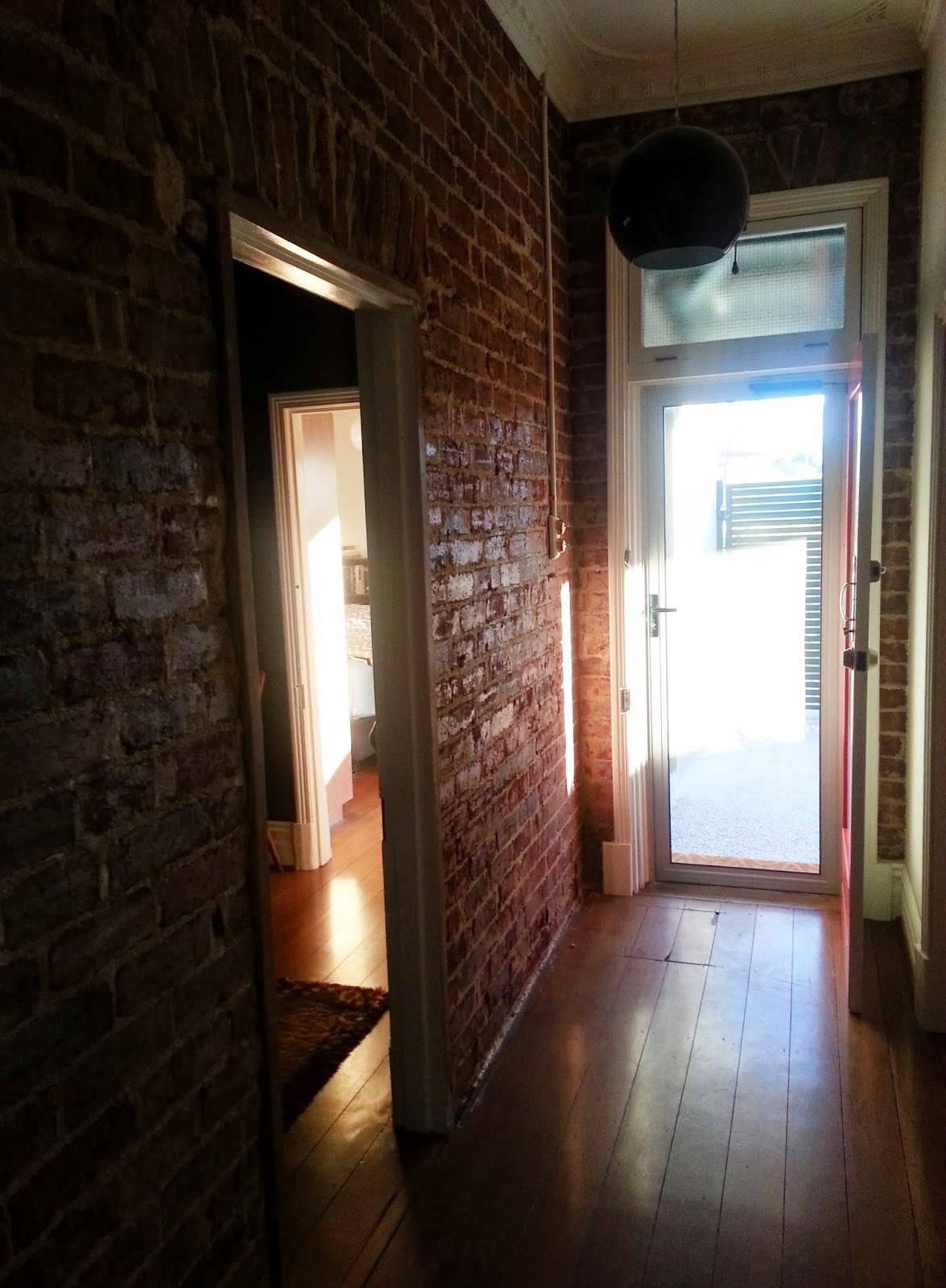 6. I am totally (and in some cases - embarrassingly) addicted to British crime and mystery television series. This is another thing (along with my nose) that I cop a lot of flack about from the family. I don't know why...

Did you know the Midsomer Murders theme is played on a theremin?
Do you even know what a theremin is?
If I wasn't a M.M. fan I wouldn't either! (riveting drama, educational too!)

A theremin is the world's first electronic instrument. It was invented by Lev Theramin, a Russian scientist, in 1920. 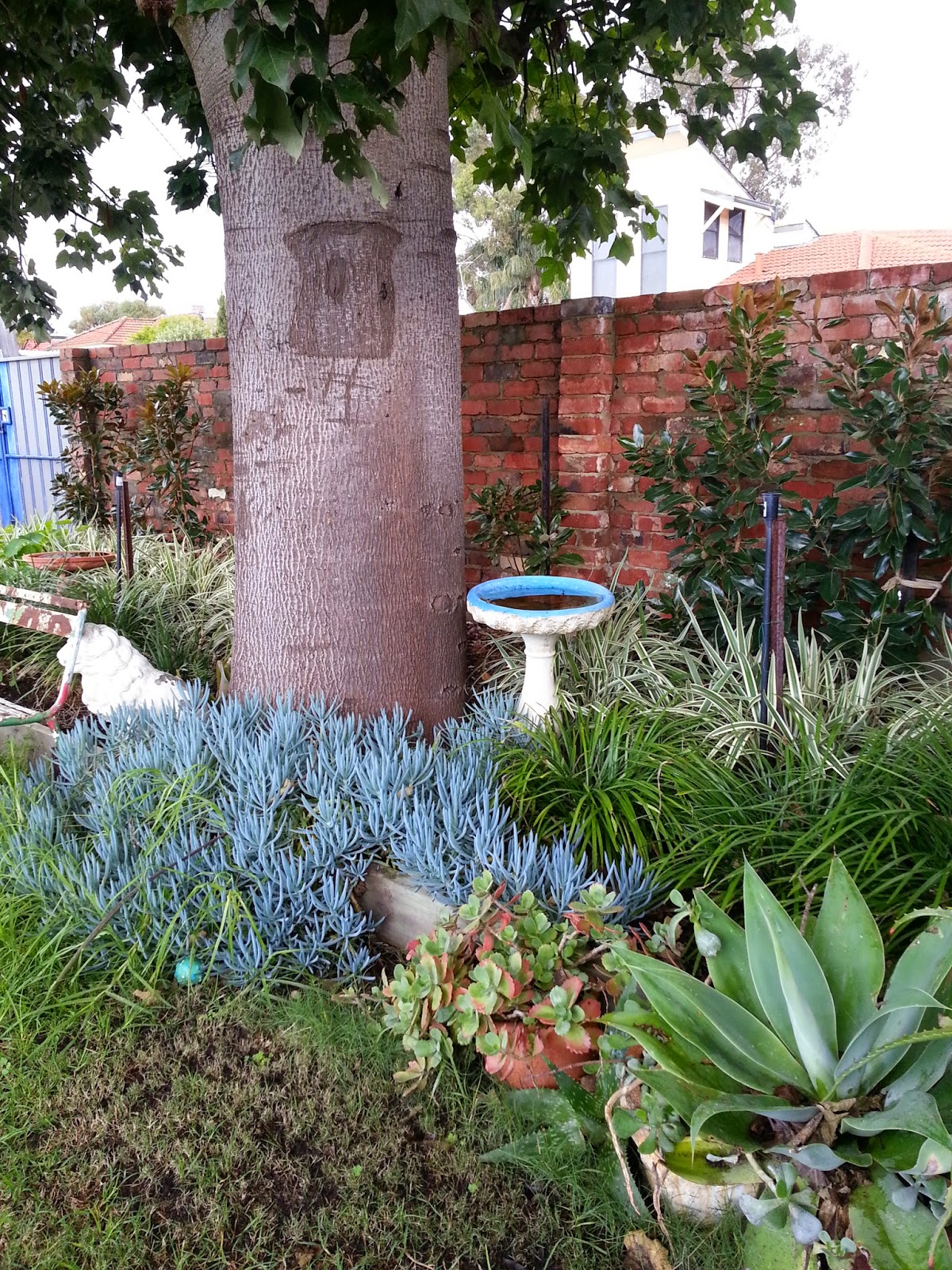 A corner of our garden, messy but filling out nicely.

7. As soon as I finish this post I'm off to the Parcel Collection Centre to pick up two pairs of Lotta From Stockholm clogs. Tan and navy. I hope I like them (and they fit). I also hope it's clogs inside the parcel, and not something boring Anthony ordered.

I don't think this is quite what the Versatile Blogger Award people were thinking of, but it's something you don't know about me and it's the best I can come up with - I also love custard! (if the clog thing doesn't cut it...)

Right that's it. I'm off to get my clogs. If you'd like to 'win' The Versatile Blogger award feel free to jump on board. Nominations are open - I'm not gonna dob you in. I know your time is precious.

Still waiting for a response from my Blog Hop nominees. Ahem ;)

Thanks for reading - you can wake up now!