I hope abscence really does make the heart grow fonder, because it feels like forever since I sat down and banged out a post...I'm finally on the mend so here goes...

What did I do after I finally dragged myself up and out of the mountain of tissues that were surrounding me? Well first I scrubbed the bathroom (it was getting s-c-a-r-y in there, and let me tell you, it's on the scary side even when it's clean and sparkling!) and then to celebrate feeling better I made me some Whoopie...Whoopie Pies ie.

Seriously I have not cooked a single thing in well over a week. Thank God my husband is home at the moment because no-one would've eaten properly, (I don't think Cup-A-Soup counts) if he was away...so "Making Whoopie" Pies was also an attempt to relieve my guilty feelings about this...

I used this recipe, recommended by Laura who has one of the prettiest blogs out there: kit and nancy. She is also as sweet as the cakes she bakes btw.

And here they are 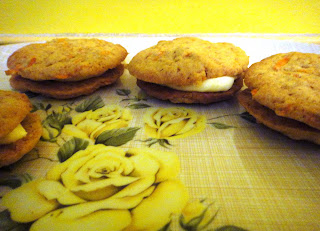 Carrot Cake Whoopie with Orange Mascarpone Cream Filling
note: please be kind when you compare my wonky Whoopies to Laura's, she is a pro in the kitchen...a cup cake queen and I'm not ok. Plus my oven door doesn't close properly...What's that saying about a poor tradesman blaming his tools? Ha-ha! 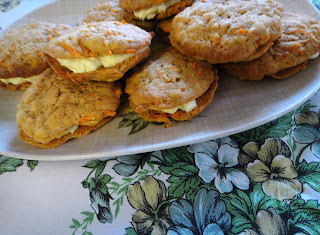 anyway, they tasted delicious and that's the main thing!
While I was on roll I decided to try another one of Laura's recipes...she calls this one A Slice of Frankie, you can find out why and get the recipe here. Laura says it's the perfect cure for Mondayitis but I think it would cure the blues any old day of the week... 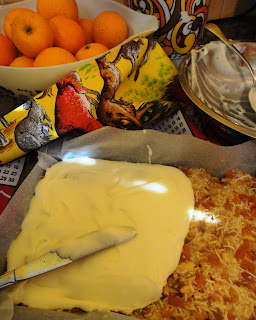 (﻿catch a glimpse of the gorgeous kangaroo tea towel in the background...it's a surprise pressie from Max all the way from New Zealand.) 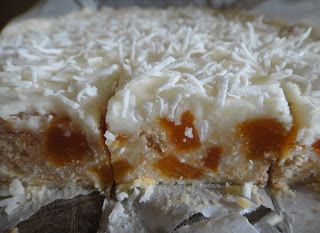 nanna-ish in the best possible way!
This was yummy too and a sinch to make...you basically just mix and melt. Be warned though, there is a WHOLE block of white chocolate in this! (but hey, take a look at all those apricots...I figure they make it healthy...hmmmm well, almost) 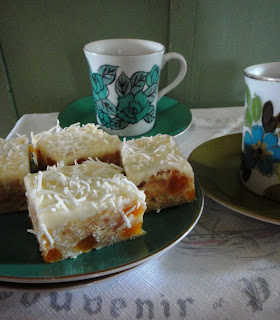 afternoon tea. perfect.
﻿
So anyway, that's me for the moment...thanks for the recipes Laura and thanks too everyone for your get well wishes x It's good to feel (almost) normal again that's for sure! I have oodles of treasures to show you, found before I got sick, so stay tuned...
P.S.
The only painful thing about doing all that baking was the washing up afterwards...at least I've got plenty of tea towels... 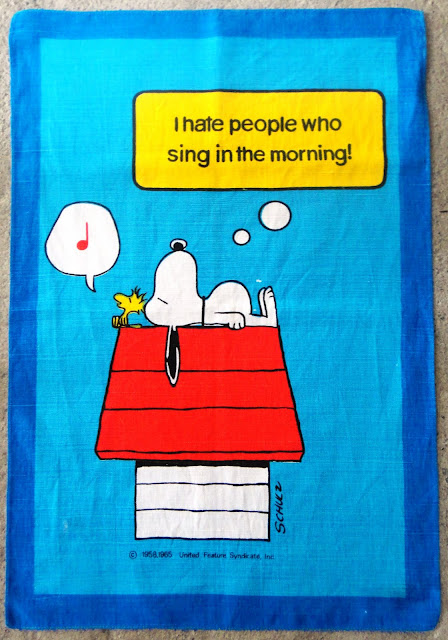 Ha!
﻿Have a lovely weekend x
I'm actually quite partial to people who sing in the morning btw...
Posted by Kylie at 4:37 PM