Yesterday I bought a pile of vintage Little Golden Books from the op- shop where I used to volunteer. It cost me $2.50 for 15 of them (and that's without a(n ex) staff discount. Most of them were published in 1973, but the earliest, Wagon Train, was published in 1958.

I still love Ladybirds more than LGBs but when LGBs are of this vintage and so cheap what's a girl to do???

One of them is called published 1973
and to say it's not what I've come to expect from a LGB would be a massive understatement.
Woobinda starts off inanely enough: it's the story of John Stevens outback veterinarian and his daughter Tiggie. Other characters include Peter Fisher, John's offsider (a recent vet graduate from Germany(!?) and Kevin, an Aboriginal boy, adopted by John.
Remind you of anything ?
It's on the third and fourth page when things start to get interesting. Look 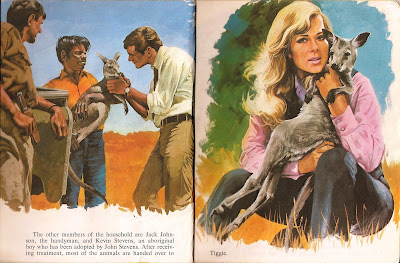 "After receiving treatment, most of the animals are handed over to...Tiggie"
You'll see more of Tiggie in a sec.
Here she is on page five 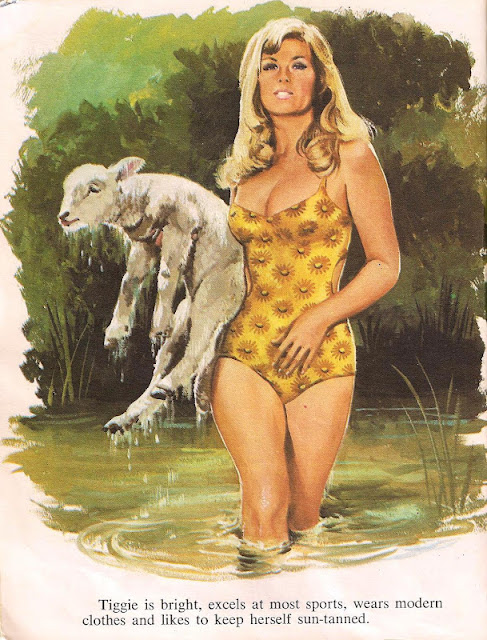 Not the usual stuff of Little Golden Books. No Eloise Wilkin in this one. They weren't meant for thirteen year old boys...were they? 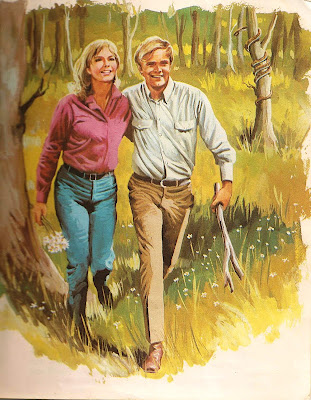 "She is half in love with Peter" (half in love?) "who treats her like a younger sister"
(Peter is a far stronger and more virtuous man than many! Jeez, he'd have to be, to resist Tiggie's very obvious charms!)
Anyway, as I was flicking through Woobinda in wonderment (a pet chimpanzee makes an appearance on page fourteen, remember we're talking outback NSW!) 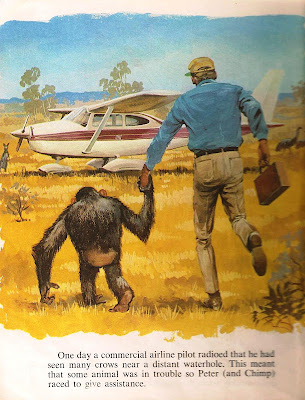 the penny finally dropped. A quick google search later and my suspicions were confirmed. LGB Woobinda is based on a 1968 television series and Tiggie provides the sex appeal.
Here's a publicity pic of Sonia Hofmann, the actress who played Tiggie 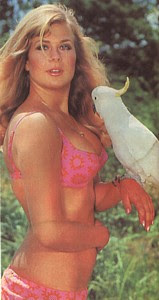 image via
Sonia also had a role in the short-lived Australian series, The Unisexers (that's more like it!) in the 70's.
Did you watch Woobinda when you were a kiddo?
Skippy the Bush Kangaroo  was must watch viewing when I was little, on the telly straight after school, but until now I had never heard of Woobinda.
I like how old stuff teaches you new things, don't you?
I think Woobinda is a little gem. I'm glad my ability to resist temptation is not up there with Peter Fisher's. If I had his strength of conviction and steely determination I would've walked out of the oppy without it. 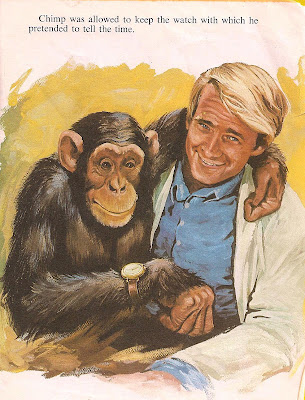 he doesn't mind a cuddle with a chimp though...
x

p.s.
just a little aside you might be interested in, last year Liza Goddard, the actor who played Clancy in Skippy the Bush Kangaroo had this to say:
"I wish I had flashed it around, as I had a lovely body, but I was prim and lacked confidence. Now I tell all the lovely young girls I work with, 'You’re gorgeous. Show it off.'"
So there!
p.p.s. Woobinda is meant to be an Aboriginal word for veterinarian, but I cannot verify this.
Linking with Sophie's Flea Market Finds here
Posted by Kylie at 1:36 PM