Prom Night
"At the prom night? Everything is alright!"
Cue music
go on, hit play.
because they weren't quite as many of you brave enough to share your prom pics as I thought there would be...chickens! I'm taking you back to 1980, when the original (and the best!) Prom Night teen slasher flick was released, to pad things out a bit. I hope you don't mind...there will be taffeta and tulle a plenty before the end of this post, I promise.
I was 15 when I saw Prom Night. At the local drive-in. I was the third wheel with my, let's call her...well developed, friend at the time
There was no shaggin in the waggin (and yes, the boy concerned did drive a panel van) involving me anyway. I can assure you of that! I was the perfect foil to my gregarious friend, who only invited me to tag along, so her Mum would let her go.
Anyway it* scared the you-know-what out of me!
*Prom Night, not the shaggin in the waggin - although that was pretty scary too!
Basically Prom Night tells the story of a group of high school seniors who are targeted by an unknown (yeah right!) killer seeking revenge for their involvement in the death of a young girl (can't tell you who, don't want to spoil the surprise!) six years earlier. Most of the action - the blood and guts and stuff - occurs on the night of their prom.
Here's the trailer
Recently I saw a copy of Prom Night in a discount bin at the shops. It was only $4.99 so I decided to buy it and relive old memories. I got the girls to watch it with me, telling them it was really, really scary. This has made them think I'm even lamer than they originally thought, because of course it wasn't scary at all! But it was BRILLIANTLY FUNNY! Lou's severed head (tomato sauce anyone?!) rolling across the dance floor, classic!
Bad hair, flares, a flashing dance floor, Leslie Neilson (attempting to play a straight guy), a character called Slick (who isn't!) Prom Night's got it all! You could do worse on a Friday night if you've got nothing better to do.
Anyway, enough padding (this is turning into a really long post - I hope I haven't lost you?) back to Frocktober and the really scary stuff..taffeta galore!
.
Meet The Prom Queens 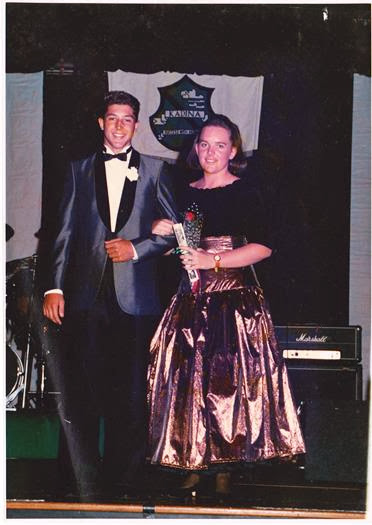 Allison (and her spunky partner Rodney) at her school formal 1988.
Isn't she a vision in black velvet and "gold garbage bags"? Al's description, that fantastic gold stuff is really "some exotic man-made (and probably highly flammable, Al) material"
Al saw this dress in an issue of Women's Day in a feature where the frocks were modelled by the cast of Neighbours (love that Al!) Of course she had to have it and she still does! Al is hoping it might be in fashion again by the time her gorgeous little girl Frankie attends her own formal. Ummmmm? Goodluck with that one Al!﻿
Al writes the hilarious and very pretty blog Just Underneath.  When I think of her, the words "top Aussie shelia" come to mind. Al's a bit of a larrikin, a bit of a stirrer, who likes to take the mick (I think Al would prefer p***!). I never read her blog without laughing. Do yourself a favour and check it out!

Do you know who this bob-headed, drop-waisted, puffy sleeved wearing vision of loveliness is? She doesn't show herself very often on her blog, but if I mentioned teak furniture, Bitossi, Marimekko, 70's homes and gardens, the Solid Gold Dancers, you'd pick her immediately, right?!
It's Carmel (aka MMMC) of 70's Chutzpah, frocked up for her formal in 1988. I reckon she looks like Head Girl material in this pic (a fact she denies vehemently), but Carmel reckons she looks like she's about belt out a few show tunes (there was a better pic of this, but it came out all blurry when I tried to upload it) - she says all she's missing is a cane and top hat!
Apart from Carmel's frock, which is pretty special, and Carmel herself of course, I am also taken with that stripey curtain she's posing so nicely in front of...
Carmel's blog is a must read as far as I'm concerned. I love it! Carmel's got class, she's got style, she's got chutzpah, but she's not the nanny! Read it.
Now, who could this wistful looking, sweet young thing be?
(and no, it's not Lucy waiting by the lamp post for Mr Tumnus, or a cast member from Riverdance...) 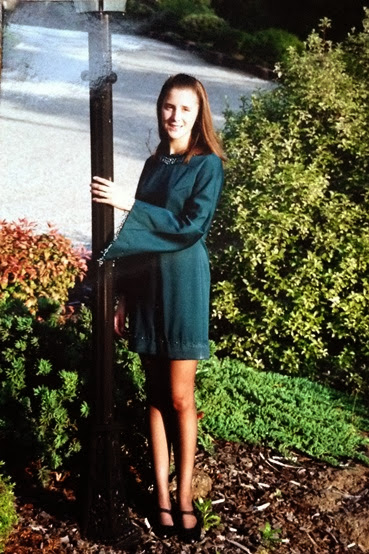 it's the Pipstar frocked up like a little pixie for her Year 11 social in 1992 (you make me feel so old Pippa)
Pippa didn't want to look the same as everyone else so she bought this vintage dress from the oppy, shortened it and "painstakingly sewed beads on the hem, sleeves and collar" Exactly what you'd expect from a creative like Pippa, right?!
Pippa makes beautiful things from string and clay. Her tassels are famous - sought after by the who's who of interiors (and by us ordinary folk), her macramé, fresh and exciting.
She is also one of the nicest people I'm yet to meet.
OMG! I've written a bloody novel, not a blog post!
I'll end with a photo of me at my Year 12 Social in 1982 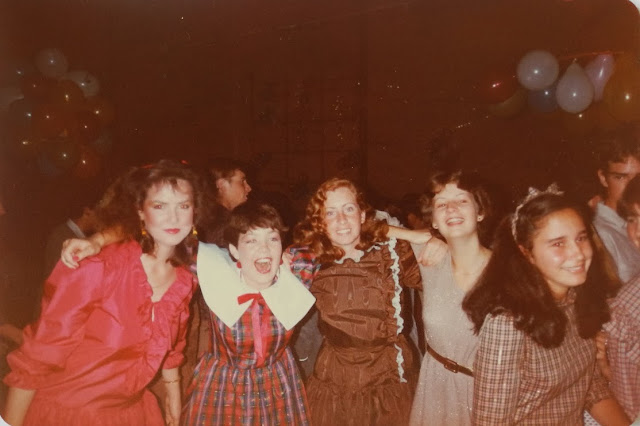 and a quote from Prom Night which describes the evening perfectly:
"Tonight someone has come to the prom alone..."
(well, at least I had my besties)
One day of Frocktober to go.
Please sponsor me HERE.
Rachel, Donna and Brismod answered my prayers yesterday (thanks girls x).
That's $1795.00 all up so far. Wow!
(someone please throw five bucks at me!)
Thank you. I am very grateful x
p.s. I'm the one wearing tartan taffeta - in case you didn't know...