It's A Retro Cook-Off!

Good afternoon everyone, welcome to "It's A Retro Cook-Off!" Thanks for dropping by, and an even bigger thank you if you've popped on an apron yourself and joined in. We love you guys! You're awesome!

There's been alot of cookin in my kitchin over the last couple of days, but NOT alot of eatin! (which in all honesty is quite surprising, because none of my fixins were as gag-tastic as I thought or hoped they'd be)

I like to think of "It's A Retro Cook-Off!" as the bloggy equivalent of an old-school Smorgasbord. So grab a plate, and check out everyone's offerings, I'm sure you'll find something to tempt repel your tastebuds.

Anyway, enough chit-chat. Here are my contributions to our buffet...

I found this recipe on retro Ruth's fabulous blog The Mid Century Menu. It is described as "a mouth-watering fluffy filling, layered with chocolate cookies"

And here's my reality: 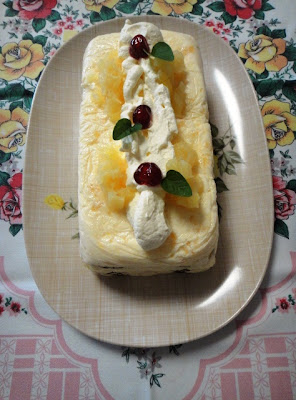 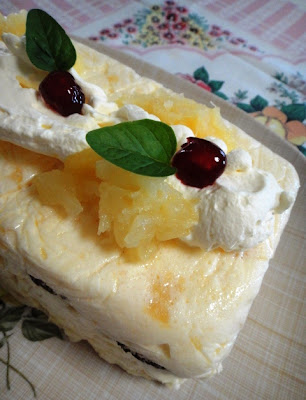 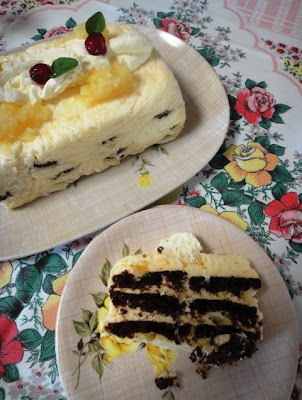 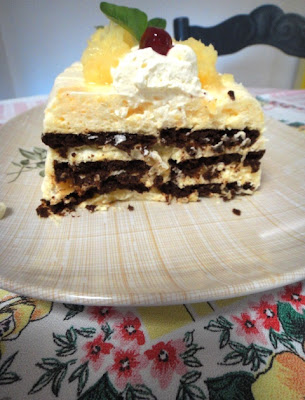 You know what's missing don't you? A big glug of yellow food colouring! I can't believe I forgot to add this - a splash of 'poison' would've brought this cake to life! It looks so insipid compared to its glowing/radiactive 60's predecessor. I was pleased though, that I managed to turn it out of the tin in one piece!

Kylo-meter: 2/5 fluffy? yes, mouth-watering? no. Not yellow enough. Would've been nicer without the biscuits.

Kiddo-meter: Despite saying "No offence Mum, but I thought the whole idea was to cook something that looks really gross - this doesn't!" both daughters refused to try it. Which says it all really, doesn't it...

Chicken Divan was the signature dish of a 1950's restaurant in New York, called The Divan Parisienne.

I'm sure the original Chicken Divan didn't contain a can of soup like mine does, but this is how it has been prepared by housewives for over sixty years. Chicken, mushroom, celery, soup it doesn't seem to matter which can you open! I suppose that's how they kept things interesting... 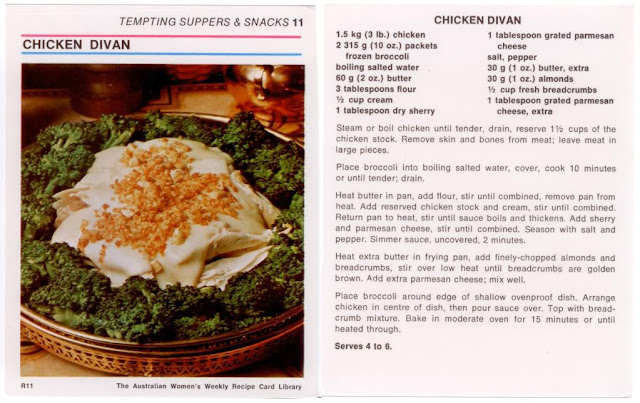 image via
(this is a posh version)

and the Curried Chicken Divan  we ate for dinner: 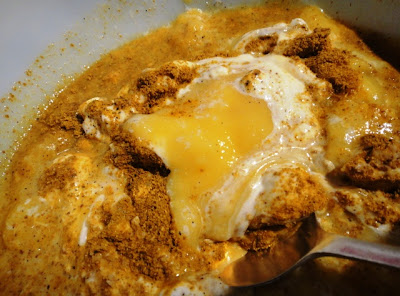 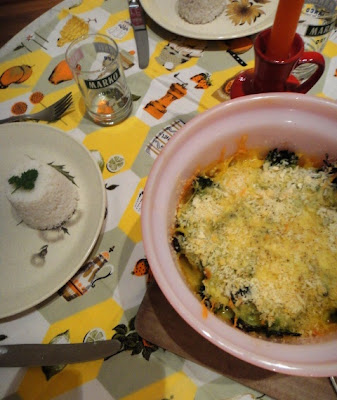 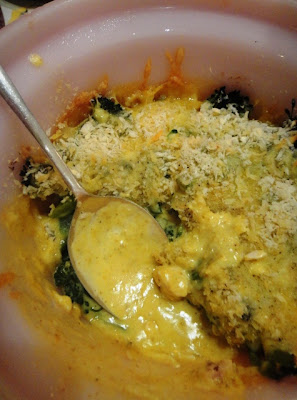 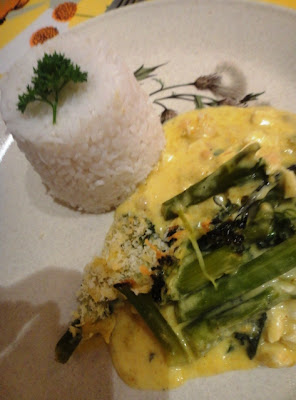 (btw, this is what our plates looked like after dinner!)

Kylo-meter: 2.5/5 there was really nothing wrong with this, there just wasn't anything right with it either!
A waste of beautiful, fresh brocolini!

Antho-meter: 1/5 "not as good as my Mum's" (do you think I should consider this a compliment?)

Kiddo-meter: .25/5 once again only one taster. Her comment: "this stuff is confusing my tastebuds!" I won't tell you what her big sister said it smelt like...

Another recipe I found here, courtesy of retro Ruth.

According to Ruth canned tomato soup is a common ingredient in depression era and mid-century cooking. I've baked chocolate cakes with beetroot, potato and zucchini in them, but I have never made one with tomato soup before, have you?


I know you might not think so, but I've saved the best for last. This cake is delicious. Although, it definitely qualifies as gag-tastic in its raw state: 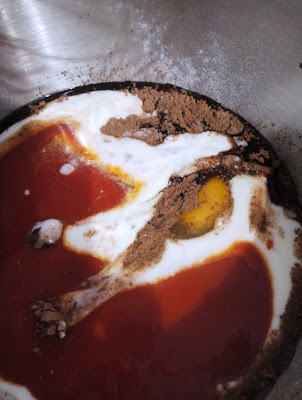 and it didn't look too appealing while it was cooking either - the tomato soup kept bubbling to the surface and errupting like larva from a volcano, or blood from a scab to be more precise (sorry) 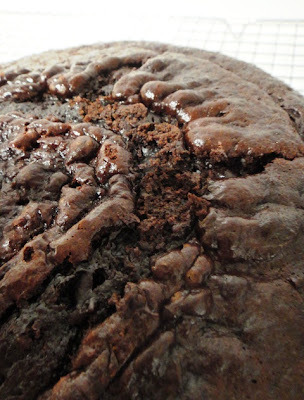 But despite all that, I promise you this cake is truly 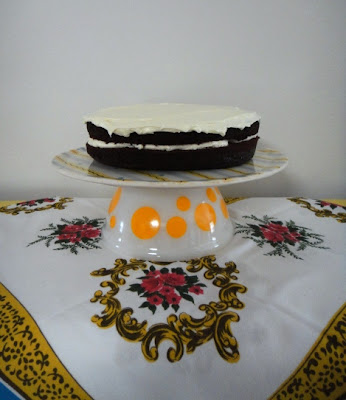 (I can't tell you how desperately I wanted to decorate the top of this cake with a circle of cherry tomatoes, but I knew I would give the game away, and have no takers if I did) 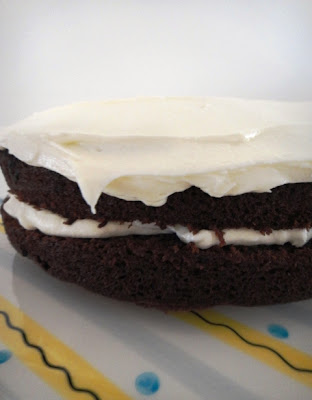 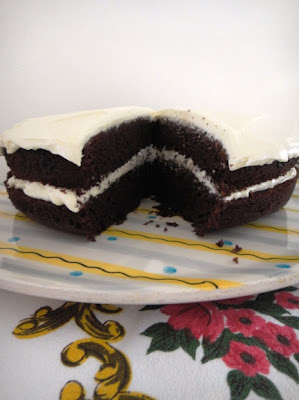 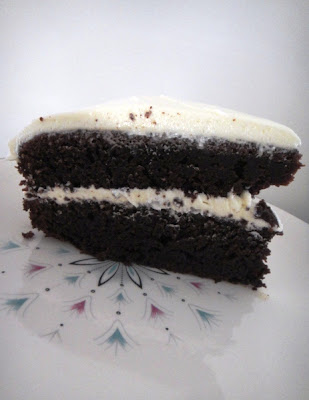 so good (and so easy) I implore you to make it! 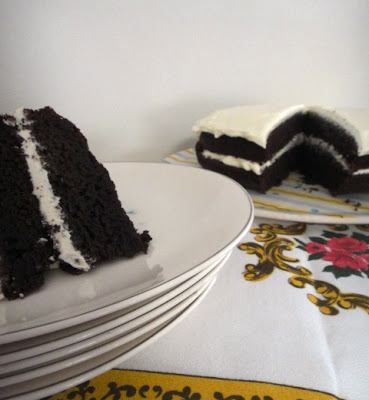 you won't be disappointed, promise.

(and fyi neither of my girlies could pick the 'mystery' ingredient)

Kylo-meter: 4.5/5 my only negative, the ooze factor during cooking.

Antho-meter: 3.5/5 Anthony liked this, but preferred the Pineapple Chiffon Cake. Once again I'll mention his devotion to the Orange Slice biccy - do not base your decision on this man's opinion! His tastebuds are clearly taste-challenged!

I kid you not, I have just served him a slice of Pineapple Chiffon with two Orange Creams on the side! Gross!!!

Okay, that's it from me. I've got a lot of left-overs to get through and wonderful blogs to visit. It's going to be a great Saturday arvo.

Thanks to retro Ruth for kindly sharing her recipes, thanks to my partner-in-crime, the lovely Donna. Thanks again to you gorgeous retro chefs out there for sharing your disasters delights, and thank YOU for reading.

p.s. Don't forget to add your link here and over at Donna's too. I'm sure there will be something to make your mouth water at her place. Or not...

Now, get clicking and﻿ check out these! (please)